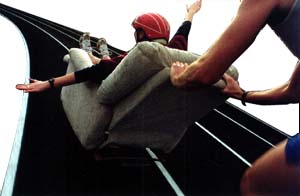 The Leisure Luge was a spontaneously organized race of skateboard-driven armchairs. The 1999 event received significant internet coverage at the the time, and BBC Radio out of London did a live radio interview as a result.

I guess I've only been home in Kentucky for a day since I returned from Manhattan, and already that seems like an age.

Today the local Audubon chapter came out to take a wildflower walk on our farm. I tagged along, hoping to learn some relevent plant names, because really, I don't know many beyond "Dandelion", which some will claim is a weed anyway.

The tour barely got farther than 200 yards from our house, and the sharp eyed among the wildflower hunters collectively pointed out 26 distinct varieties of blooming plants. I was impressed. I couldn't find that much diversity in my curbside trash in Manhattan. (Not that Manhattan doesn't have a thing or two going for it-- it just doesn't have front yards.)

These flower hunters know how to make a short hike exciting. I usually strike out looking for exciting macro-features-- hilltop views, cliffs, and caves. Focusing on plants and the microcosm makes for the power hike. I'll consider this next time I need to squeeze a lot of natural beauty into a 20 minute hike.

For now, I'm excited just to have my toes in the grass again, to exchange concrete walls for actual hills.

I believe in conversation as powerful tool for human connection and positive change. A true conversation is like many-to-many communication. There no gatekeepers and anybody can get their word in.

The more a medium embraces the many-to-many model, the more I like it. The web excels at this. While only a small percent have the internet in their home, a good deal more people can get FREE access from the library or elsewhere, and from there they can get a FREE email account that they can check from anywhere the web is, and even build a FREE homepage with FREE tools.

Many people can put up a webpage that the whole (online) world can see. I think the lack of knowledge of this FREEness of the web is a greater inhibitor to people getting online than home access.

The medium that comes next in line to meeting the many-to-many model is print. With the Kinko's/DTP revolution, distributing a 'zine locally is feasible for many people (especially with copies stolen from work). Many of the strongest communication channels here are one-to-many as you know.

Going back to the web for minute-- Web publishing does not mean instant worldwide distribution. Advertising bucks and the power to promote still draw an audience there. The difference is that a low budget non-profit person or group can attract a MASSIVE audience without advertising, while that is almost impossible in the print medium.

TV and Radio have the rare many-to-many public access channels, but for the most part the mediums are one-to-many. You don't get what you want, you get what they are playing.

Like you, I like media that you can take with you, a book, a radio. We are in the last years that the internet will be excluded from this. People won't realize it's even the internet anymore, because the wires will be gone, and it won't look like Netscape. Yesterday, I saw Windoze95 on a Seiko wrist watch. WTF? Already someone has visited my website from a cellphone. There are no barriers to prevent this-- it's already happening. The new language is called XML, of which HTML is a subset, and XML goes anywhere.

Just like past technologies-- Cars, TVs, radios, telephones-- the internet will affordable by most. The shift to a many-to-many medium for the people will be revolutionary, and I'm excited.

Already systems that use existing TVs as monitors sell for $200 to $300 and get people on the internet.

There is another positive movement underway within 'net culture that is little known (because it has no marketing budget) but very important. This is the freeware movement. The philosophy behind it is that all the tools you need should be free. The progress so far has been amazing. As it turns out, freeware turns out to often be the BEST software because the way in which it is developed-- by keeping the source code of the software open for all it to see, t pulls on the talent pool of the world's best and brightest, and I do mean the WORLD's, not a small team who can't tell their company secrets to anyone.

Witness the success: Linux, the premier freeware operating system, is widely regarded a first-rate, stable OS. Flavors of Linux run a standard PC or Macintosh. Apache, a freeware webserver, holds over 50% of it's marketshare, ad it's growing. Perl, a freeware programming language is the runaway choose for web programming. The GIMP, freeware Photoshop, currently is more powerful in many ways than Photo shop, and it hasn't even hit version 1!

As the economy shifts towards communication, information and ideas, it will be interesting to see how the burgeoning freeware culture affects in.

It will continue to be true: To reach as many people as possible we must embrace all mediums.

This was my first juggling gig. It was at a different college with a new crowd and no money on the line so I had nothing to lose. It was a really no worry deal for me, excepting that I might screw up in public and drop and a rolled newspaper on my face, with one end laced with flaming Sterno.

In high school English, I always had the best looking report covers. I'd done them up on pop's laser printer with primitive design software, before most kids had a computer.

So, classmates were intimidated by my reports because they LOOKED great, but I might have spent more time on the cover than the report, so they needn't worry.

My last big project before I discovered the internet was to produce "Baldknobbalooza". (When I was high school there really was no web as we knew it, that was pre Netscape v1.  We had bulletin boards you could dial into, which hardly anyone used) Yes, before every alterna-event became something-alooza I produced a festival under that name. It became a major event. I made flyers with Corel-Draw with fractals. I had staff of 12 to help me to organize everything, with a music director, a poetry director, a sound person, lots of helpers-out, plus a security team of six. We had 72 shirts printed up, most tye-dyed by hand, plus special shirts designed for "STAFF" and "SECURITY". In all we had 8 local bands play for free, poets and acoustic jams between the acts, a rented port-a-john, informal hiking and volleyball. The event went from 3 pm to midnight on graduation weekend and we charged $5/person and had about 200 people attend (the festival was on my farm). We charged $8 for plain shirts and $10 for tye-dye, and sold them all, I think. About 50 people got in free, associated with the production in some way, mostly band members.

We made enough money to pay for all the t-shirts, the port-a-john, a massive sound system, and a fee to my father who rented the dance hall to us. The $100 or so we had left over was re-invested into fixing up the dance hall, because there was no good way to divide the profits among all the volunteers. It was a hell of a time, long heralded as "the great high school party" by those who went.

I didn't end up having much fun, stressed out everything was going well, making sure someone was working the gate, pointing to people the bathroom, taking care of troublemakers. I was disappointed by the amount of cigarette butts and beer bottles left all over the premises, but my staff had it all cleaned up by the time I woke up the next day, which I appreciated. More than once during the event I discovered there were people collecting money (and not pocketing it) at the gate, that I didn't even know. Finding that honesty amongst strangers was encouraging.

One morning when I came to school with sleepy eyes from working organizing the project, a friend commented "Mark, if you put as much energy into your classes as you put into that event, you'd be Valedictorian." Perhaps@, but not nearly as much fun.